Introduction to Austronesian Peoples and their Migration Theory 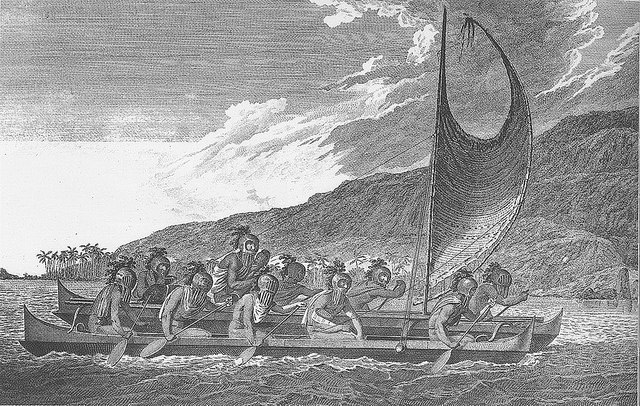 The term, AUSTRONESIAN (南岛) PEOPLE, refers to a family of people categorized and by their language and culture and more recently, their DNA. Studying the indigenous culture of the Austronesian people, especially the history, reveals striking similarities. Similarities can be found in their music, dancing, hunting, singing, weaving, weaponry and traditions. A traditional stone weapon known as the “batu” or “patu” can be found in Taiwan, New Zealand, Polynesia, and even Peru, with similar size and shape in all of these areas. This leads some academics to suggest an Austronesian connection to South America.

AUSTRONESIAN LANGUAGES are similar in structure, and share much of their vocabulary. Even today, the Maori people in New Zealand, the native Hawaiians, and tribal peoples of Taiwan use many of the same words in their language. For example, their word for “eye” in many Austronesian languages is “mata or masa.” This includes Taiwan’s Amis, Bunun, Paiwan, Puyuma, Siraya and Yami languages. This word is also the same in Bali, Bungku, Makassar and many other Indonesian languages. The word is the same in many tribal languages in the Philippines, Polynesia and New Zealand. It is pronounced “maka” in Hawaii and “mat” in Vietnamese. The word "Matahari" originated in Indonesia and comes from the Austronesian words, "mata-eye" and "hari-day."

AUSTRONESIA refers to the geographic region originally settled by Austronesian peoples. This covers and area of 40+ countries throughout the Pacific Ocean, Southeast Asia, and the Indian Ocean. The range includes Taiwan in the North, to New Zealand in the South, to Easter Island in the East and Madagascar in the West. Austronesian countries also include the Philippines, Indonesia, Malaysia, Brunei, Cambodia and Vietnam.

There are several AUSTRONESIAN MIGRATION THEORIES supported by different academic researchers. Some researchers conclude that Austronesians migrated from the region that is now India, through Southeast Asia, Indonesia and across the Pacific islands. Some point to evidence of a connection to South America and conclude that Austronesians may have originated there. Scientists more recently have supported the theory that Austronesians originated from the island of what is now known as Taiwan. Different groups have supported their favorite versions, either because it is often easier to support longstanding theories, or because there may be political reasons to support their favorite versions. However, aside from their political interests, people should consider to strengthen their case with a rational approach and base their conclusions on the most up-to-date body of scientific evidence, which is growing every day.

Some of the most basic evidence is based on common sense, rather than advanced science or technology. Just having observation and interaction with Austronesian cultures around the world, one can see the similarities. Also, if there was a source of culture and language that dispersed over a wide region over thousands of years, one would expect that the location with the most diverse Austronesian languages and cultures would be the source. Taiwan would certainly qualify, being home to at least twenty-seven Austronesian languages and cultures, sixteen of which are currently recognized. Also, common sense dictates that the location with the oldest evidence of Austronesian culture would be the likely source. Evidence of Austronesian peoples in Taiwan dates back to 8,000 years ago. Austronesian artifacts anywhere else doesn't show up until thousands of years later.

Thanks to the dutiful efforts of scientists, including DNA researchers, archaeologists, linguists, geologists, biologists and botanists, a body of scientific evidence is growing and migration patterns are coming into focus. The most important advanced research is bringing migration theories into sharper focus, and disproving some traditional theories.

Perhaps the most indisputable research on genetic identity and mapping is being done by Dr. Marie Lin (林媽利), director and professor at the Transfusion Medicine Laboratory of Mackay Memorial Hospital (馬偕紀念醫院輸血醫學實驗室) in Taipei and by other scientists in Taiwan. (Intro on Dr. Marie Lin) She had studied blood samples from people all over Taiwan, and noticed anomalies from Taiwan’s indigenous peoples. Dr. Lin studies the DNA in the mitochondria of blood cells, which is an even more accurate indicator of genetic ancestry and identity. 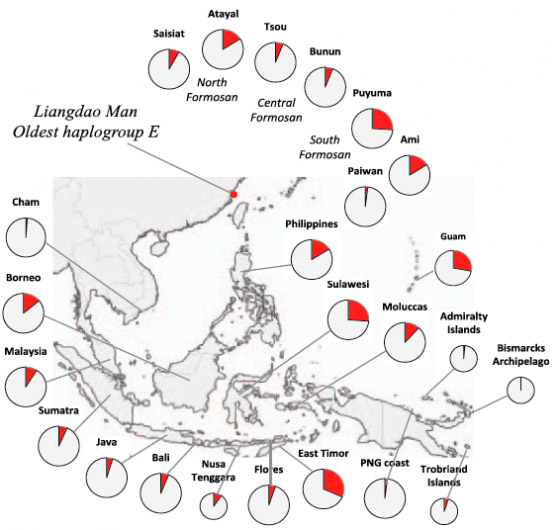 Mitochondria has unique protein types (haplotypes) that are passed down through the mothers from generation to generation. There is a unique type of haplotype that only Austronesian peoples have (E Haplotype), which cannot be found in people of Mainland China.

With this migration theory, the Austronesians populated Taiwan from 8,000 years ago to 2,000 years ago, living in isolated regions separated by high mountains and ocean, diversifying and developing their own unique culture and language subgroups. Driven by fighting and competition for resources, some tribes may have navigated on ships to settle new lands, hopping to the nearby Philippines, before spreading Southwards and Eastwards across the Pacific. Once the Austronesian settlers reached what are now the Indonesian Islands, they interacted and mixed with the Melanesian settlers that were migrating from Southeast Asia. Austronesian and Melanesian cultures combined to form unique cultural forms, an languages also mixed and influenced each other.

There are other forms of scientific evidence that support the Austronesian Migration Theory from Taiwan. This includes the study of the migration of the Pacific Paper Mulberry, an important tree that Austronesians used to produce textiles for their clothing. There is also strong evidence that the Taiwan dingo dog (and a rat species), coconuts, and sweet potatoes followed the Austronesians on their migration routes, as well as other plants that were used for sustenance.

As a sidenote, the Austronesians were likely not the first settlers of Taiwan. During the Ice Age, about 20,000 years ago, a race of dark pygmies migrated across a land bridge to the island that is now Taiwan. There are records of a race of dark pygmy people that were killed off by the Saisiyat tribe of Taiwan. In fact, dark skinned pygmies could have migrated from Africa in prehistoric times in a much earlier migration that spread across Southern Asia and even up to Taiwan. There are pygmies or Negritos that can be found in India, Andaman Islands, Malaysia, Philippines and Thailand, and are thought to come from the Austrlaoid-Melanesian ancestral lineage. These Aboriginal ancestors may have also settled Australia about 40,000 years ago, and completely dominated the continent. Austronesians may have had contact with Australia, but it is perhaps this Aboriginal domination that prevented Austronesians from settling permanently on the continent.
Posted by Tony Coolidge at 2:06 AM